Britain’s foreign secretary, Philip Hammond, will formally reopen the UK embassy in Tehran on Sunday, nearly four years after it was shut down as a result of a mob attack.

The Iranian embassy in London will be reopened at the same time, as part of a rapid warming of relations between Iran and the west following the agreement reached on 14 July on the future of the Iranian nuclear programme. Hammond’s Tehran trip, the first by a British foreign secretary in nearly 12 years, comes soon after visits from the French and Italian foreign ministers, Germany’s vice-chancellor, and the EU’s foreign policy chief.

Hammond will be accompanied on his visit by a handful of British business leaders as well as the Foreign Office political director, Sir Simon Gass, who represented Britain in the marathon talks leading up to the July nuclear agreement.

The UK ambassador’s residence and some of the embassy buildings in Tehran have been restored since they werestormed and ransacked in November 2011 by a crowd of activists rallied by hardliners angry at the UK’s imposition of sanctions on Iran. The mob included members of the paramilitary basij brigades, under the control of the Revolutionary Guards. The protesters climbed the walls of the embassy, burned the British flag and looted property from the living quarters.

The reopened British embassy will be staffed initially by a small number of diplomats led by Ajay Sharma, who has been non-resident chargé d’affaires since 2013. A new British ambassador has been chosen but not yet announced. Before the storming of the British embassy in Tehran, Iran’s parliament, the Majlis, voted to downgrade bilateral relations from ambassadorial to the rung below, the level of chargé d’affaires. Majlis approval is likely to be needed to restore ambassadorial ties.

It was initially expected full diplomatic relations would be resumed soon after each country named non-resident chargés d’affaires two years ago, but a number of technical issues held up progress.

When British diplomats prepared to abandon the embassy and residence, they ripped out communications devices and other electronic equipment and destroyed much of it. The UK wanted to replace the hardware before reopening but was constrained by an Iranian rule limiting the weight of any single diplomatic bag to 15kg.

Furthermore, in order to authorise the renewed issue of visas to Iranian applicants in Tehran, the UK Home Office insisted that a bilateral agreement was signed allowing for the repatriation of Iranian nationals in Britain who had overstayed their visas. However, Iranian law forbids acceptance of Iranians deported from foreign governments against their will.

After months of delay, and increasing alarm in London that Britain’s European competitors were beating the UK in the race for the Iranian market ahead of the expected lifting of sanctions, compromises were found on both outstanding issues. It was decided to reopen the British embassy before it was fully kitted out and rewired. The details of the compromise over returning visa-less Iranians have yet to be released.

The conclusion of the “joint comprehensive plan of action”, in which Iran accepted limits on its nuclear programme while the UK and five other major powers agreed to lift sanctions, boosted London’s determination to overcome the remaining obstacles and led to intensified negotiation between the Foreign Office and the Home Office on how to resolve the visa issue, paving the way for Hammond’s visit.

The last British foreign secretary to go to Tehran was Jack Straw in 2003. He also went in September 2001, days after the 9/11 attacks had thrown geopolitics into confusion and brought a short-lived rapprochement between Iran and the west in the face of a common enemy, the Taliban.

Even then, the visit was highly divisive in Iran because of the two countries’ troubled history, dating back to Britain’s imperial past and its suspected complicity in a 1953 CIA coup that overthrew the elected Iranian leader, Mohammad Mossadeq.

After a turbulent nine years following the Islamic revolution, Britain and Iran restored full diplomatic ties in 1988, only to break them off again the following year as a result of Ayatollah Khomeini’s fatwa against the author Salman Rushdie. Partial ties were resumed again in 1990 and upgraded to ambassadorial level in 1999.

A decade later, rising international tension over the Iranian nuclear programme clouded the relationship once more. As part of international pressure on Tehran to cease enrichment, London froze Iranian assets worth nearly £1bn and each country expelled two of the other’s diplomats from their capitals. Britain was accused of interference in Iranian politics at the time of the 2009 presidential elections.

Two days before the storming of the UK embassy, the Majlis voted by an overwhelming majority to downgrade relations because of further British sanctions, and MPs chanted “death to Britain” as the bill was passed. 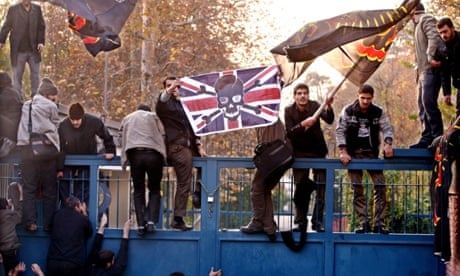 Hammond’s visit to Tehran represents a significant improvement in bilateral ties as both sides upgrade relations to full diplomatic status.
Iran’s conservative-dominated parliament and many hardliners are deeply suspicious of Britain and have not hidden their disdain towards the reopening of the embassies, but the decision to restore relations fully could not have happened without approval from the establishment. In the wake of the storming of the British embassy in 2011, Iran’s supreme leader, Ayatollah Ali Khamenei, said it was “not right” to carry out the attack. “On the recent occupation of the evil embassy [of Britain], the sentiments of the youth were right but entering [the embassy] was not right,” he said at the time.
After Hassan Rouhani became president, Britain and Iran took significant steps towards reopening their missions. David Cameron and Rouhani held a historic phone conversation in November 2013. It was the first direct contact between a British prime minister and an Iranian president in a decade.
In the absence of embassies, about 400,000 Iranian nationals living in the UK, and fewer than 100 UK nationals residing in Iran, have faced difficulties with consular services, such as passport renewal or consular access.
This website uses cookies to improve your experience. We'll assume you're ok with this, but you can opt-out if you wish.Accept Read More
Privacy & Cookies Policy
Necessary Always Enabled